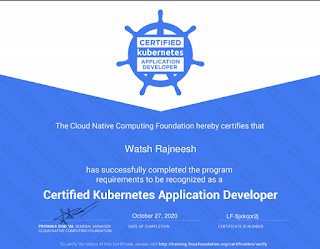 Wrote CKAD test on Sunday 10/18/20 at 11am. Exam has 19 questions of which I could attempt 17. I have been using kubernetes in oracle cloud for almost a year now and have been practicing for CKAD for some time so I think being able to attempt all 19 questions is difficult. Some questions required more time than others. I don't think there is equal weightage to all questions.
You can take the test from home. We can use an external monitor with the laptop (which i did) and we need to share both the laptop and the monitor's screen with the proctor. We also need to share the camera so proctor can watch while we take the test. The initial setup with PCI (test taking company) is bit involved and may take 15-20 mins so plan accordingly. In my case i could not write the test first time where the web terminal was unable to connect to Linux Foundation's server. Proctor tried with me for almost 1.5hrs and finally needed to reschedule. The next attempt was smooth but still setting up for the exam does take about 15mins.
At the beginning of each question you are given a command to connect to the right cluster. There were 4 such clusters. For the questions i attempted, only 2 of the 4 clusters were used. Also the questions are grouped together by the cluster you need to connect to in order to minimize the changing between clusters. Also there are parts in the question that can be clicked on and copied and then pasted in the terminal. The terminal is a web terminal so you can see it side-by-side with the question on the same web page. You can have one more tab open for https://kubernetes.io/docs. So it is an open book exam but speed really matters so you need to know what to look in the docs and where to look in it.
Grading of the exam may take up to 36 hrs after which the result of pass/fail is known.
I will update the post once i have the result.
I failed my first attempt - scored 60% and pass score is 66%.
I attempted my re-take today 10/25/20 (Sunday) at 11am CST. This time i realized that each question has a weightage mentioned in percentage. Like some were 2% whereas some were 7%. I also flagged 3 questions to come back to later and moved on. So by the time i was on 19th question i had 32 mins left. I did get sufficient time this way to at least look at all questions. Of the 3 i had marked to return back to later, i only could attempt 1 of them. But they each were 2% weightage so most likely my score wont be impacted by much. Lets see how i fair this time. I will update again tomorrow evening once i receive my result.
An easy to install local single node k8s cluster is microk8s from Ubuntu. I had used this and OLCNE clusters for my practice but microk8s is the easiest option.
Received result for my CKAD exam - i scored not too high (67% only) but still could clear the exam successfully. I plan to write CKA sometime down the line. I think to clear this exam one needs to be quick with typing linux commands. I think 80% or above is a very  good score for this exam. But anyway now that i am past it i will rather focus on learning more at this point. Waiting for the Marko Luska's Kubernetes in Action 2nd Edition book to be published and in the meanwhile will be ramping up on other Cloud Native stuff - like service mesh, functions, API gateway, streaming services and monitoring stacks (ELK, Prometheus, Grafana) etc.
Following are the materials i used to prepare:

My study notes on CKAD exam prep is available at https://www.amazon.com/dp/B08MXGDT3L
- October 19, 2020 No comments:

The Cuckoo's Calling by Robert Galbraith
My rating: 5 of 5 stars

A great mystery series by the one and only J K Rowling or Robert Galbraith. This is the first book in the series of Cormoran Strike and his good assistant Ms Robin Ellacott. Robin has just moved to London city from country side and has joined temporary placements agency which places her to be assistant to one Mr Strike who is a private eye. Robin brings good luck to Strike as one her very first day there comes a client Mr John Bristow who wanted Strike's help in investigating the death of his sister Lula Landry, who was a supermodel and whose death was considered a suicide thus far. From there on Strike interviews all possible folks who came in contact with Lula in her daily life and finally he and Robin solve the mystery and find the killer. A nice whodunnit book by one of my favorite authors.

Book Review: The Body: A Guide for Occupants by Bill Bryson

The Body: A Guide for Occupants by Bill Bryson
My rating: 5 of 5 stars

This was my first book by Bill Bryson. He is an excellent author - the book is easy to read and thoroughly researched. In this book author makes the subject of human body accessible to laymen. My interest in this book was to get a refresher of things i had read in biology classes in school days and topics that one hears being mentioned by health related books/articles - ranging from understanding of how the different organs, glands and parts of the body function, the different kinds of diseases, their symptoms and how they are acquired, our body's built-in defense mechanism (the immune system, white blood cells and the different glands that fight-off the harmful microbes entering our body - like the placenta that shields the womb/baby from the harmful microbes), aging and eventually death and the state of the body after one dies. It also mentions of the evolution of medical science to some extent and calls out the people who contributed to the field - sometimes at the cost of their own lives. A very interesting read.

Book Review: The Picture of Dorian Gray by Oscar Wilde

The Picture of Dorian Gray by Oscar Wilde
My rating: 4 of 5 stars

I had been meaning to read this book for a long time and finally could get this checked off the list of to-be read books. The impression i had of this book was that it will be a quick read but as is the case with every book that is heavy on literature, it tends to be a dense read -as most of the book is loaded with phrases and full of sentences that can be underlined and quoted. The story is short - a guy named Dorian Gray is blessed with good looks and full of youth. Dorian sits for a painter Basil Hallward, who worships Dorian and considers Dorian to have a very positive influence on his art - one that any artist can only find by chance in their life time. Then there is Lord Henry Wotton who is a friend of Basil and Dorian. Dorian learns from Lord Henry the importance of youth and comes to see his own portrait painted by Basil full of life. Basil gives that painting to Dorian to keep. Dorian likes that painting so much that he wishes if only he could never loose his youth and his painting becomes old with time instead. This wish of his comes true. As time passes Dorian retains that charm of his youth, the same boyish look he had when he sat for that painting. The painting instead starts to appear old. As Dorian gets drawn towards vices in his life he is still able to retain his youth but his painting started to show the evil look. Dorian hides the painting from everyone. He commits several sinful acts and evens kills the painter who drew the picture. At the end he decides to kills the Dorian in the painting and that puts an end to his life.
It is not a light reading as i had thought initially so read it if you enjoy reading good literature (prose or poetry).

Book Review: The Eye of the Needle by Ken Follet

Eye of the Needle by Ken Follett
My rating: 5 of 5 stars

A german spy Die Nadel (or The Needle) has been in London during World War II. He is assigned the task to gauge the military at Port Calais in France. Allied forces have been planning a camouflage setup at Calais to dupe the Germans into thinking the attack is going to happen from Calais instead of from Normandy. To that effect, many artists and movie studio setup workers were put to building a massive fake military setup in Calais. Die Nadel or Henreich Faber happens to find out that its a fake and not a real military setup and from that point on the book is about whether he is able to deliver the proof of his findings to Abwehr in time or not. The story is fast paced and keeps the reader engaged. A good novel to start reading the works of Ken Follet.

Book Review: The Death of Ivan Ilych by Leo Tolstoy

The Death of Ivan Ilych by Leo Tolstoy
My rating: 5 of 5 stars

This is the first book of Leo Tolstoy i read. Its a small novel with 10 chapters and took me about 3hrs to complete in all. The story is about the life of a man named Ivan Ilych. It starts with folks from his work and his friends attending his funeral. The story then revolves around who he was and how he got injured on falling while he was infatuated with decorating his new house, his relationship with each member of his family, his reminiscences during his last days of his life when he reflects on his childhood and the happy memories of those days, what he feels about the doctors who don't seem to empathize with him and fail to answer his questions concerning his health in a direct manner. Tolstoy excels in describing the emotions of the characters and there are several occasions when the reader feels drawn by the realism of author's description of what the characters feel. Its a masterpiece of a work and i highly recommend it for the literary value of this book if not so much for the story in it.

Passed Docker Certified Associate exam today May 5th 2020.
I have been procrastinating on this for a while but due to COVID-19 shelter-in-home and no classes to take kids to, got enough time to get this taken care of.

Now regarding the exam, while i was lingering on when to take this exam (had enrolled last year December) Docker got bought by Mirantis and the DCA exam which used to multiple choice only became a bit harder with majority of questions (42 of total 55) being DOMC (Discrete option multiple choice). Also the syllabus got revised (v1.1 of study guide) to include many Kubernetes topics in the exam. Lots of Kubernetes related questions were there from topics including persistent volumes, configMaps etc. Fortunately i am also preparing for CKAD (Certified Kubernetes Application Developer) and going to write it soon on 16th May, 2020 so i was able to answer those.

My study notes are available at https://www.amazon.com/dp/B08MY87SMK

My experience taking the test was - it took me about an hour to complete the exam so i think the 90mins duration is sufficient.
- May 05, 2020 No comments:

Or donate bitcoins at : Donate Me Bitcoins